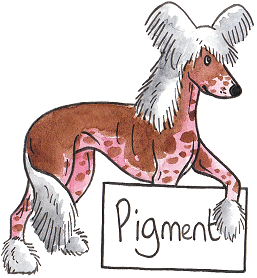 The key to understanding dog genetics is simply this: there are two types of pigment which create coat colour in dogs (and most other mammals). Pigment is just the thing that gives each strand of hair its colour, just like pigment in paint or dye, or pigment in your own hair. All coat colours and patterns in dogs are created by these two pigments, which are both forms of melanin. Each of the pigments has a “default” colour, and it can then be changed by various genes. 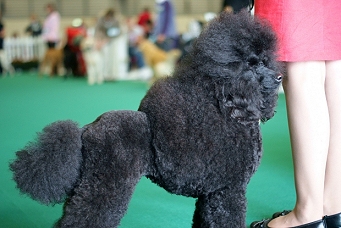 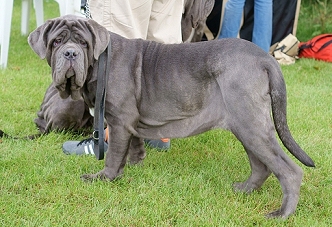 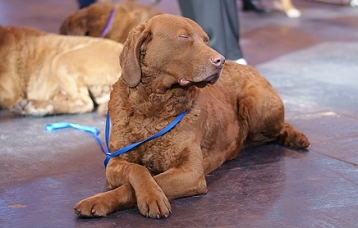 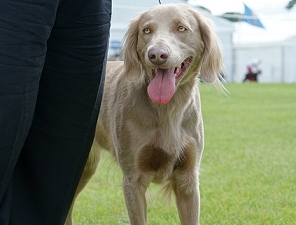 Eumelanin is, by default, black pigment. All black areas on a dog are caused by cells producing eumelanin. However, there are genes which turn eumelanin into other colours – liver (brown), blue (grey), or isabella (a dusty pale brown). If a dog has any of the genes to turn its black eumelanin into liver, blue or isabella then all of the black in its coat will be changed. This is because these genes restrict and/or alter the production of eumelanin, so the cells aren’t able to produce full-strength pigment. We call blue and isabella dogs “dilutes” for this reason. They either lack the genes which tell their cells how to produce proper eumelanin, or their cells know how to produce it but can’t.

As well as being found in the coat, eumelanin is present in the other parts of the dog that need colour – most notably the eyes (irises) and nose. The nose will be black, liver, blue or isabella depending on the type of eumelanin the dog can produce. The colour in irises is produced by layers of pigment, and brown eyes like most dogs have (and like many people have too) are caused by black eumelanin in those layers. When a dog has altered/restricted production of eumelanin, the irises are also unable to produce full-strength eumelanin. This means that the dark pigment in the eye becomes lighter, and the eyes turn into a light brown colour, known as amber or gold. This isn’t really a colour we find in human irises, so it’s hard to illustrate it with an example. The closest we have are hazel eyes, which are a mixture of green and brown, and so appear lighter than normal brown eyes.

When we talk of dogs that are “black pigmented“, “liver pigmented”, etc, we mean that is the colour of eumelanin that the dog can produce. Sometimes these dogs have no eumelanin at all in their coats (their skin cells produce only the other type of pigment, phaeomelanin), but we can tell what their “pigment colour” is by looking at their nose. A black nose means the dog produces black eumelanin, and so on. It’s confusing to talk of a dog’s “pigment colour” like this, because as we know, eumelanin isn’t the only type of pigment. But it’s common practice, and I’ll be using such terms a bit on this site. 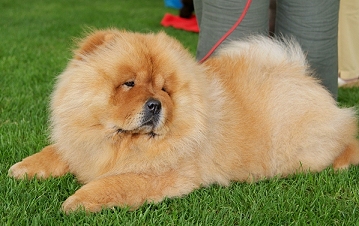 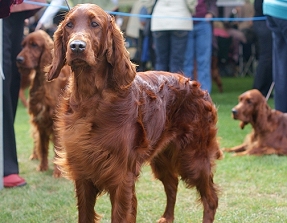 The second type of pigment, in some ways less important than eumelanin, is phaeomelanin. This is red pigment. The term “red” covers everything from deep red (like Irish Setters) to light cream, encompassing gold, yellow and orange. Whenever we talk of red, unless we’re talking particularly about Setters, we mean the whole range of tan colours.

This shows the variation in colour of phaeomelanin. Unlike eumelanin, it doesn’t occur in two distinct colours (black and liver, with dilutes counting as shades of those), but rather just one colour, which varies in intensity. The most intense phaeomelanin colour is Irish Setter red. The default colour is probably golden, with different genes causing it to be more or less intense (i.e. telling the cells to produce a higher density of pigment particles, so making the colour stronger, or a lower density, making the colour weaker, so lighter).

So far so good, but this doesn’t seem to explain all the coat colours in dogs – how about white?

White isn’t really a colour, so white hair on animals isn’t caused by pigment but a lack of pigment. In dogs it is a lack of both eumelanin and phaeomelanin. White areas on animals are simply caused when the cells cannot or do not produce any pigment at all. Sometimes the whole animal is affected, like in albinos, and sometimes just parts of it are affected, like in dogs with white markings. It can affect the production of eumelanin in eyes and noses too, turning noses pink and eyes blue (or red in proper albinos). There is also a second type of white, which is caused by dilution of red (phaeomelanin) pigment, making the cells produce fewer pigment particles than normal, so the colour gets lighter. If it is diluted enough, it can become white. Many white dogs have a slight ivory/cream sheen to their coats because their cells are still producing a very small amount of pigment. This sort of white does not usually affect eumelanin, so any black/liver/blue/isabella areas on the coat will stay dark, and the eyes and nose will do too.

The colour genes in dogs do two things – they determine the eumelanin and phaeomelanin colours/shades, and they control the distribution of these two pigments. They tell certain cells to produce eumelanin, others to produce phaeomelanin, and sometimes they tell them to not produce pigment at all. Exactly which cells are told to produce what is determined by the exact set of genes, although it can be random to a certain degree (e.g. puppies may have slightly different white markings to their parents, or patches in different places). Sometimes genes can even tell cells to switch which type of pigment they are producing every once in a while. This means that as a hair grows, it becomes banded with black and red, because the cell produces black (eumelanin) for a while, then changes to red (phaeomelanin), then back to black, etc. It’s a bit like when you highlight your hair and after a while the roots start to show through. The overall colour of an animal with this sort of black and red banding will generally be a muddy brown from a distance, and close up you will be able to see the black parts of the hairs. It’s called agouti, and it’s the colour of wild rabbits and mice, as well as a large amount of other mammals. It’s popular amongst wild animals because it provides very good camouflage. It also occurs in dogs, but it looks a bit different (like the colour of a wild wolf rather than a rabbit) and isn’t very common. 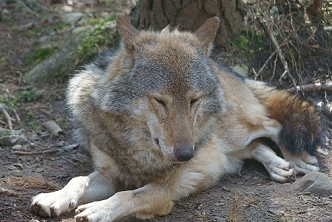 Pigment in Other Animals

Melanin is found almost all the way across the board, in mammals, birds, fish and insects, and even makes up the dark colour of squid ink. Our own skin, hair and eye colours are determined by melanin production, and melanin plays an important part in protecting our cells from harmful UV rays. In fact, melanin (particularly eumelanin) has been found to play a part in health and immunity in a number of species. Hair and feathers are stronger and longer-lasting when pigmented with melanin, which is one reason why many white birds have black wingtips – their flight feathers need to be durable.

However, melanin is not the only pigment found in animals. For example, yellow in reptiles is produced by a pigment known as xanthinin. Pigments can also be picked up from the environment rather than made by the animal itself – the most well-known example being that of flamingoes being pink due to carotenoid pigments in their diets, which are present in crustaceans. Interestingly, the pink colour of salmon is also caused by carotenoids obtained from their diet. In captivity, synthetic carotenoids have to be added to the diet of both flamingoes and salmon to maintain their colour.

Contrary to common belief, albinism is not actually a complete lack of pigment. It’s just a complete lack of melanin. In mammals, which generally only produce melanin, this does indeed result in the animal being completely white. However, in other animals different types of pigment remain unaffected. For example, an albino snake may be yellowish due to its production of xanthinin. 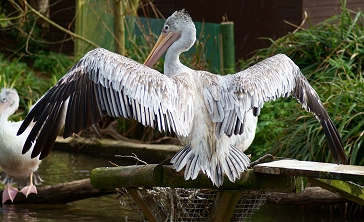 This pelican shows black flight feathers on its wingtips. The melanin produced in these feathers makes them stronger than the white feathers elsewhere on the animal. 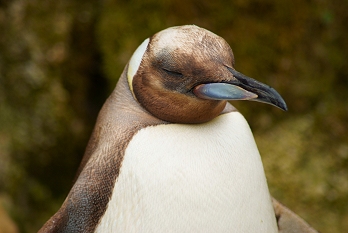 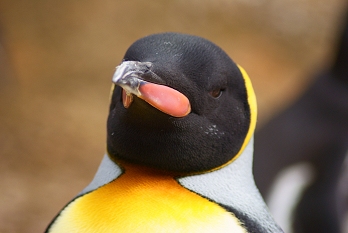 The penguin on the left above is a colour known as isabelline. This is a form of leucism. Whereas albinism affects only melanin, leucism affects all pigments. To explain this we have to use fairly technical terms, as it is basically to do with the “migration” of pigment cells from the neural crest during the development of the embryo. If this migration is interrupted for any reason, the pigment does not migrate fully and white/non-pigmented areas result. Leucism can affect the whole animal or just patches (partial leucism), and most white markings seen in dogs are technically due to leucism. It does not affect the eyes because the pigment in those does not come from the neural crest, and therefore leucistic animals have normal eyes rather than the pink/red eyes seen in albinos. 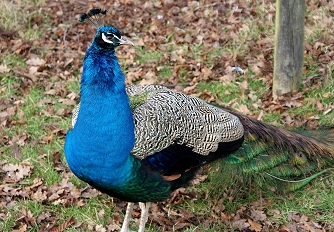 The bright blue colour seen in this peacock occurs fairly frequently in birds, but in fact is not caused by a blue pigment. It is simply caused by the structure of layers of melanin in the feathers and the way the light hits it, in the same way as iridescence.

All of this probably seems a bit confusing at this point. Many genetics sites gloss over the types of pigment for precisely this reason. However, I’ve decided to include this information because it really is crucial to your understanding of dog genetics (and the genetics of other animals too). Once you’ve grasped the idea of the two types of pigment, and understand how they work, the rest should be plain sailing.