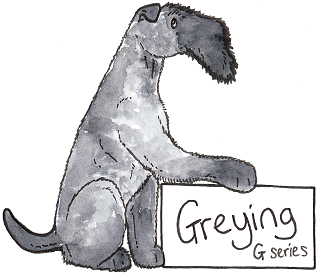 The greying gene occurs on the G locus. It is dominant, so G is greying and g is non-greying, and in order for a dog to express greying it only needs to have one copy of G (so its genotype can be Gg or GG). A dog which doesn’t express the greying gene has the genotype gg.

The greying gene, like dilution, affects eumelanin (black and liver). However, unlike the dilution gene it doesn’t actually affect the nose or eye colour, it is progressive (so a dog with greying is born solid black or liver and becomes lighter as it gets older), and it doesn’t always affect the whole of the coat to the same extent (the shade of grey in different parts may vary, and some parts may even remain black). A dog with the dilution gene may have greying as well, but it’s rare for the two genes to occur in the same breed.

Greying does not affect phaeomelanin (red) to the same extent. Sometimes breeds which have the greying gene also come in shades of cream, which suggests that the lightening of the two types of pigment is connected. However, as the rich tan on some Yorkshire Terriers proves, there is not necessarily a strong connection. Red is generally lightened by the intensity (I) series, and some breeds simply carry both greying and phaeomelanin dilution.

One last interesting thing to note about greying is that while it affects dogs with tan markings (saddles, traditional tan etc) it does not affect masks. Kerry Blues are a striking example of this – their main coat may turn to silver while leaving the hair on their muzzle solid black. It is not known why this happens.

Breeds With the Greying Gene

The greying gene occurs in a small amount of breeds, the most notable of which are:

As you can see by this list, greying is found almost solely in long-haired breeds. This is probably because the hair lightens as it grows, so on a short-haired dog the hair doesn’t get long enough to start greying before it is shed and a new hair starts to grow. Some short-haired breeds may well have the greying gene but it is just not visible. Greying seems to be particularly prominant on non-shedding breeds such as the Poodle and the Kerry Blue, presumably because each hair, if it’s not shed, has much longer to turn grey.

In technical terms, we can hypothesise that the greying gene causes the eumelanin pigment in the hair to break up and degrade more easily (probably through structural faults in the proteins making up the pigment). This means that the hair simply doesn’t “hold” pigment in the same way that it would normally do. Any new hairs that begin to grow (for example, if the dog is shaved down) are the normal colour and the hairs then lose the colour as they grow and age.

Because greying is dominant, it appears regularly in mixed breeds (as only one parent needs to have the gene), particularly in the UK where Bearded Collie crosses are common, as well as various terrier crosses. 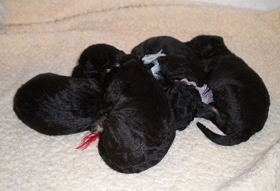 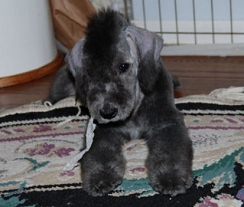 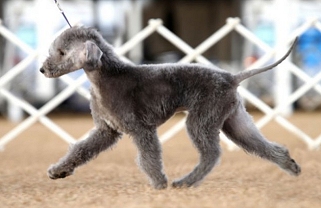 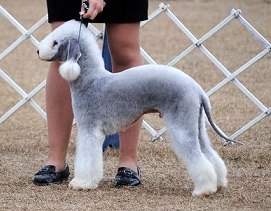 Dogs with greying may take years to turn from black to grey. This Bedlington Terrier shows the progression of grey as a dog ages, from birth to 16 months. Notice how the shortest areas of the coat (tail and ears) are the darkest, followed by the body, and the longest parts of the coat (leg furnishings and topknot) are the lightest. 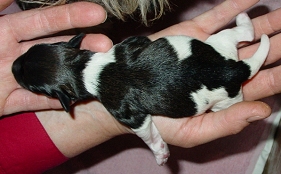 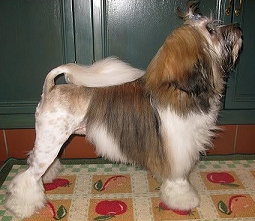 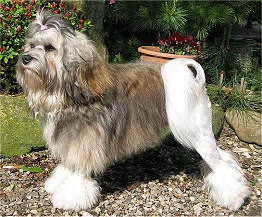 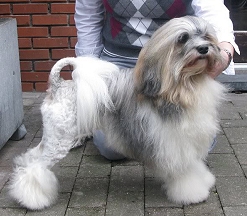 Kai here demonstrates greying on a sable. Sables are often born very dark, as you can see in the first photo where newborn Kai looks almost black. By the final photo his black has turned completely to grey. 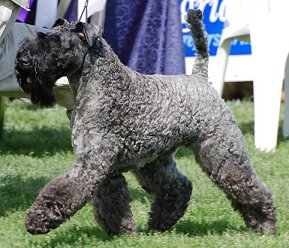 This Kerry Blue Terrier has very lightly-coloured body fur, but its muzzle is still black. This is because it has a black mask (Em). This photo was taken by June. 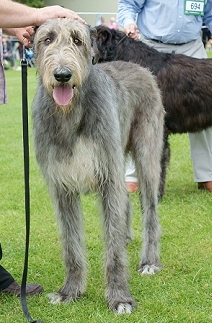 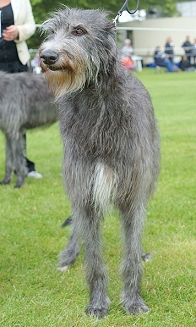 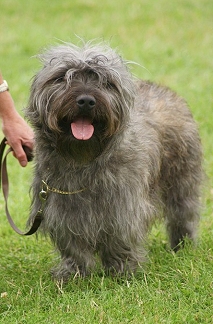 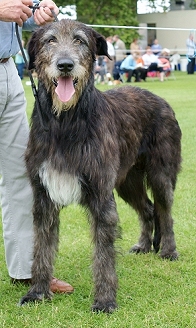 Four dogs showing the different extents of greying, from light (left) to dark (right). In some breeds it is thought that the different shades of grey are “fixed” and that dogs are genetically light, medium or dark grey (and so will not lighten beyond a certain point). It is possible that the dark dogs are gg, the medium dogs are Gg and the light dogs are GG. Of course, the lightness of the coat can also be affected by the coat length and type (the non-shedding Bedlington, above, may end up almost white but the shedding Wolfhounds and Deerhound above will not get any lighter than in these photos). 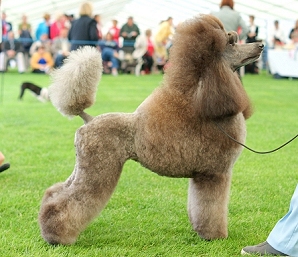 The Standard Poodle shown here has very uneven greying. Although this dog has brown tones in its coat, confusingly it is most likely a blue (dd), with extensive bronzing (bleaching of the dark pigment to brown) as well as greying. The key is the blueish nose and the short fur on the muzzle, which is greyish rather than the deep brown that you would expect to see if the dog was simply a liver with greying. The light muzzle could occur on an isabella (liver dilute) dog, however the nose is much too dark and the brown colouration on the head and ears is much too deep for isabella. 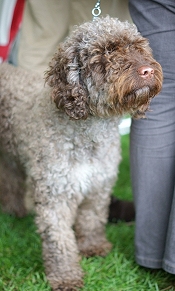 This is an actual liver with greying. The dark pigment around the muzzle is possibly a mask, which would not usually show up on a solid liver dog but in this case has not greyed like the rest of the coat. Compared to the Poodle above, it becomes easier to see that the Poodle is not a liver as the pattern of brown pigment is different (this dog shows richer liver on the paws and muzzle), and the nose is much lighter on the true liver. 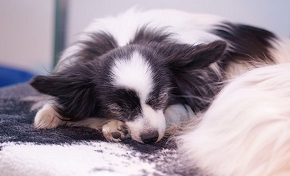 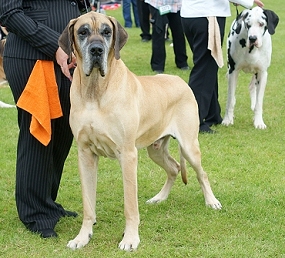 This is another form of greying that does not appear to have a genetic basis. Usually a dog’s muzzle and face will grey with age, but in some dogs this occurs early (before the dog is 5). This appears to happen most often on dogs with black masks. The Papillon above shows normal age-related greying, and the Great Dane shows premature greying.