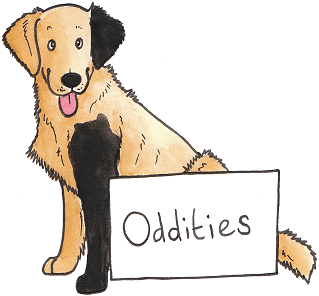 A somatic mutation is a mutation that occurs in the body cells after the embryo has begun to form. Cells are divided into two categories – germline cells (i.e. gametes) and somatic cells (all other body cells). When a mutation occurs at the point of conception (when the first cell begins to replicate) then this mutation may enter the germline and so be passed on to future generations, but after this point the two types of cell replicate separately and any mutations occuring in the somatic cells will only be passed on to the descendents of those cells and will not be passed to the next generation. This is because only the information carried in the gametes will go on to form a new individual (of course, mutations may well happen in the gametes too during the individual’s lifetime, and these mutations will be passed on).

This may sound complicated, so perhaps an example will make it clearer. Cancer is a somatic mutation. Sometimes a mutation occurs in a cell that makes the cell “immortal”. Most cells can only replicate a certain amount of times, but when this particular mutation happens the cell is able to replicate itself indefinitely (this is the biological definition of immortal), and this is how tumours form and also why they can be very difficult to get rid of. However, although the predisposition to cancer may be genetic, cancer itself is not as it occurs as a mutation in cells which will not go on to form new individuals.

Another type of somatic mutation in dogs involves pigment. If a pigment mutation takes place during the development of the embryo, patches of another colour may appear on the puppy. This is most often seen as black patches on recessive red Labradors and Golden Retrievers (it is not certain why it seems to appear in these breeds more than others). The painting at the top of the page shows what this often looks like. All it takes is for one cell to mutate early on in development – then all cells descended from that one as the embryo grows will be the different colour. Due to the mutation these patches effectively have a different genotype to the rest of the dog, and this is sometimes known as mosaicism.

A very rare form of mosaicism is the chimera. A chimera is a single animal that is the combination of two separate embryos. You may have heard this term used to describe creatures with the DNA of two different species spliced together, such as human/mouse embryos created in labs, but it also occurs naturally when two fertilised eggs combine very early in development. Effectively, the resulting animal is two individuals in one. It has patches of one set of DNA and patches of the other as well. Sometimes it can be impossible to tell a chimera without genetic testing (particularly in humans), but in some cases the resulting animal may be a combination of two different colours. I do not know of any proven dog chimeras, but the effect may be similar to the somatic mutations already discussed, but more extensive (roughly 50/50 of each colour in random patches). 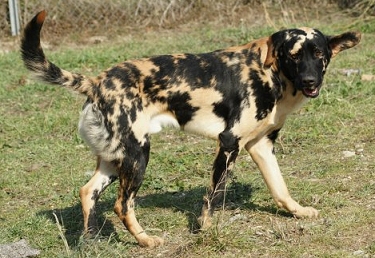 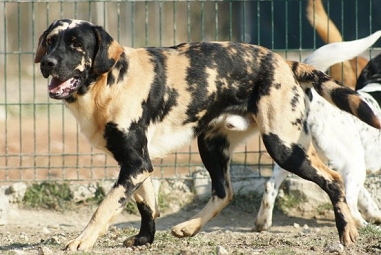 This incredible Labrador appears to show somatic mutations, but is a possible chimera due to the extent of his patching. These photos were taken at a rescue centre in France and sent to me by Damien Ricco but we have been unable to locate the original photographer. If you took these photos then please contact me and I will be happy to add credit (or remove them if you wish). 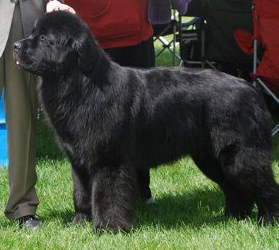 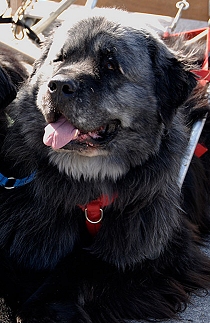 Vitiligo is a condition where the skin/coat cells stop being able to produce pigment, causing areas of white. It can have a variety of causes (including an auto immune disease that attacks pigment cells), but in dogs does not usually have any adverse effects other than coat colour. The pigment loss is generally concentrated around the head/face, but often spreads to the rest of the body.

Phaergus, the Newfoundland above, has developed what appears to be vitiligo on his head, chest, back and tail. The first picture shows Phaergus in May 2010 (at 3 years old), and the second shows him in March 2011. Phaergus and his photos belong to Bobbi Walker. 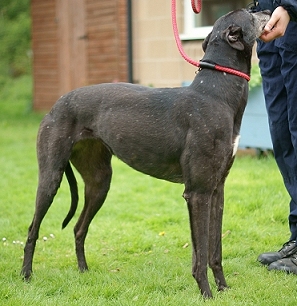 I have not seen this phenomenon in any other breeds but it appears to occur fairly frequently in black Greyhounds. There are small white spots on the coat, almost like ticking in reverse. These dogs look like they have been sprinkled with snow. It is not clear whether this is caused by some form of greying, vitiligo, or whether it is actually a colour gene. Vitiligo is unlikely as this is usually concentrated around the face and not in small spots all over the body. 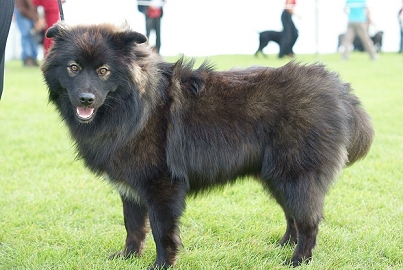 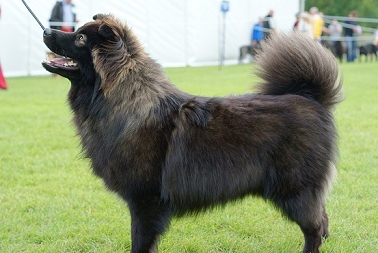 This unusual pattern appears to occur only in Finnish Lapphunds. Some are darker than this – but all have the tan spectacles around the eyes. It does not fit any of the usual tan patterns, although the spectacles are reminiscent of agouti.