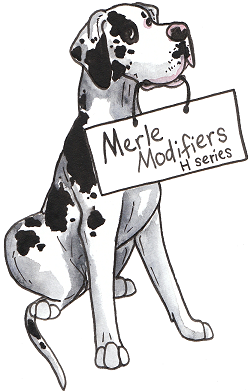 A merle modifier is a gene which, when inherited along with merle, will affect the way the merle pattern appears. A dog with a merle modifier but no merle gene will not be affected at all. It is thought that merle modifiers are inherited separately from merle and appear on their own locii, but there is disagreement about which locii those are. There are two known merle modifiers and there may be others which have not been properly identified. 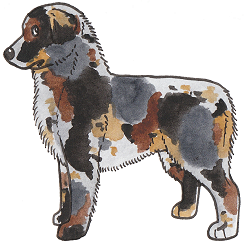 Tweed is a merle modifier that turns the diluted parts of the coat (which should be grey in a normal merle, or light brown in a liver) into a variety of brown, grey and tan shades, resulting in a dog that has very similar markings to an African Wild Dog. It is known to occur in Australian Shepherds and Catahoula Leopard Dogs (where it is known as “patchwork”). It is possible that the tweed mutation occurred in just one of the breeds to begin with and then spread to the other, as interbreeding between the two breeds is common in the USA, or else it simply occurs as a mutation every now and again in breeds in which a high number of merles are bred (more merles increases the possibility of mutation, and merle is known to be a fragile gene that mutates more frequently than most others). Either way, it is a rare and striking pattern. It is often assigned its own locus, Tw, and is thought to be dominant.

Some people claim the existence of two genes which cause the tweed pattern. One causes very random patterning with white patches amongst the grey, brown and black. Australian Shepherd breeders know this as “harlequin”, although it is different to the harlequin found in Great Danes (see below).
The second gene is thought to be true tweed. This type of tweed does not include white patches. Sometimes it is also more regular than the “harlequin” type, and the different colours can cover larger areas of the dog. It is not known whether these two types of tweed are caused by separate genes or variations (or modifications) of the same gene.

Tweed can occur in any of the patterns shown on the merle page (with tan markings, white, brindle etc). However, interestingly, it has never been reported to occur on a double merle. It’s not at all certain why this is. 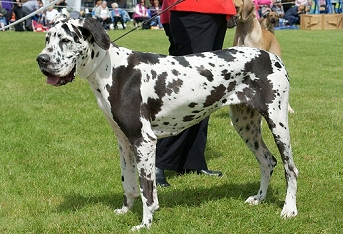 Harlequin is a completely unique modifying gene which affects only dogs with the merle gene. It turns the areas between the dark patches into pure white (occasionally with some grey ticking or patches). This means a blue (black) merle will become white with black patches, because all the grey in its coat is turned to white. What is even more interesting about this gene is that it also affects phaeomelanin (red), not just eumelanin (black, liver, blue, isabella) like other merle modifiers. That means that a sable dog with the merling gene won’t just be affected on the parts of its coat that are black (tipping, mask etc), but the whole of the coat will be harlequin. It will become what is known as a “fawnequin” – tan (sable) patches on a white base, with black patches where it would have shown black merling. The patches on the fawn section of the dog are located where the dog would have had black patches if it had been a solid blue (black) merle.

Harlequin is thought to occur on its own locus – H. It is dominant, so H is the harlequin gene and h is the non-harlequin gene. It is inherited separately to merle.

Every single dog with the harlequin gene and the merle gene will display harlequin. The only genes which would stop harlequin from being visible would be ones which turn the dog completely or almost completely white, and these are not present in Great Danes (except for double merle). Any other dog, whether it is brindle, sable, masked, or whatever, will become a harlequin. If it has white markings, the resulting harlequin pattern will simply lack dark spots where the white markings are supposed to be.

The harlequin gene will not work its own – it requires the merle gene as well. So a normal, heavy- or medium-marked harlequin is HhMm (heterozygous for both harlequin and merle). It is claimed by some breeders that harlequin is a lethal gene, meaning that two copies of it will cause the puppy to miscarry or be born very severely deformed. It may not be correct, but if it is, we can assume that all harlequins are heterozgous for harlequin. It is certainly true that all harlequins that have undergone genetic testing so far have been heterozygous. A very lightly marked harlequin (with few dark spots) may be homozygous for merle. This is a double merle (see double merle page). A non-harlequin dog, such as a solid black or a black with irish spotting (known as a “mantle” in Great Danes) may carry harlequin but not display it because they don’t have the merle gene. Such a dog would be Hhmm (heterozygous for harlequin, homozygous for non-merle), and if bred to a merle may produce harlequin puppies.

The one colour which a harlequin dog cannot have patches of is merle itself (meaning a patch that is grey with black sections). Dogs which appear to be harlequin with merle patches (“merlikins”/”merlequins”) are in fact double merles without the harlequin gene (double merle causes a piebald-like pattern, and the patches may have torn edges and appear very harlequin-like). “Merlikin” is, therefore, an incorrect term, left over from the days when genetics were not fully understood and harlequin was believed to be a white pattern, not a merle modifier. 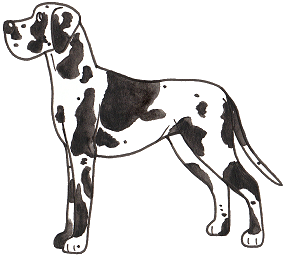 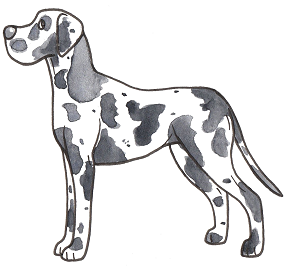 Harlequin with the dilution gene, turning the patches and nose blue (ddHhMm) 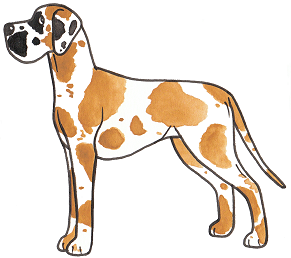 Harlequin with the sable and masking genes (AyAyEmEmHhMm) 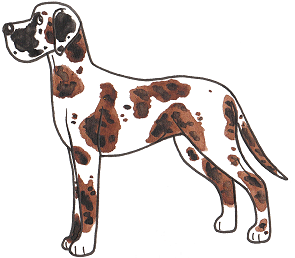 Harlequin with the brindle gene (sable is also necessary for the brindle to show all over the body) (ayaykbrkbrHhMm). The brindle will be broken up and patchy because of the merle gene (see merle page). 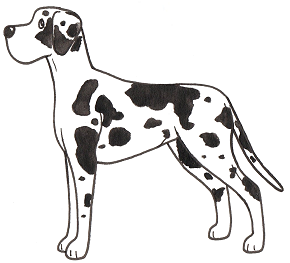 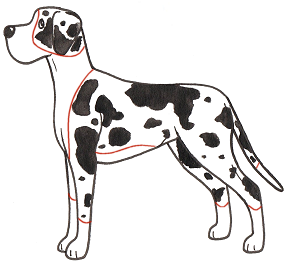 Harlequin with irish spotting (HhMmsisi). The red line shows the border between the harlequin markings and the white spotting. 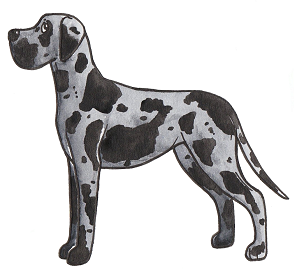 Merle without the harlequin gene (hhMm) 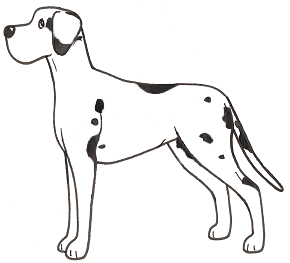 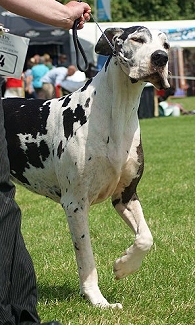 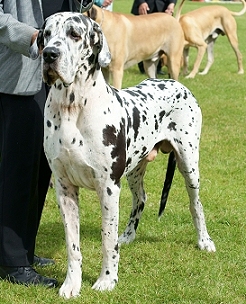 These two pictures show Great Danes with normal black harlequin. The first dog has the irish spotting white pattern (there are no spots on the front of the neck, the lower legs or the face). Black (blue merle) harlequin is the only type accepted by the Great Dane standard, but the other colours shown in the drawings above do occur in the breed. Both of the dogs in the photos also show greyish areas which are reminiscent of the original merle colouration. Dilute patches are also common in harlequins, but dogs with jet black patches and a solid white base (with no grey areas or ticking of any kind) are preferred. 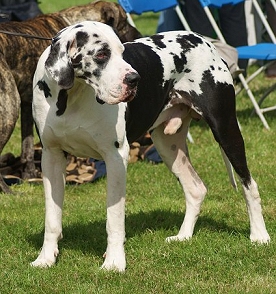 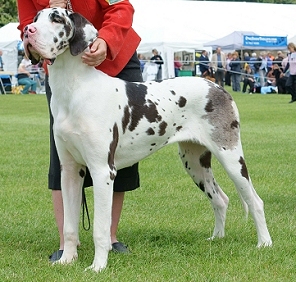 The first harlequin here has very large patches, which are generally not preferred in the breed. The second dog shows a pattern that is currently much more “fashionable” in the ring, with smaller, more “torn” patches and a large amount of white. Note the large dilute patch on the hip – these occur regularly in harlequins, just as they do in merles. 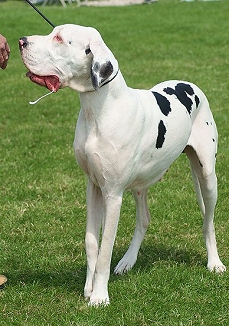 This harlequin is most likely a double merle, due to the high amount of white.