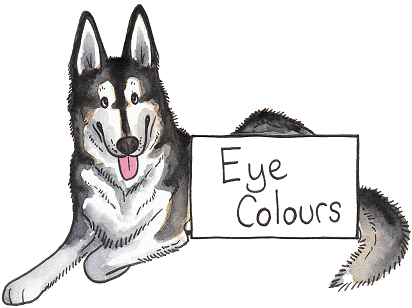 The default eye colour for dogs is brown:

However, a number of genes can affect eye colour.

Amber eyes usually occur when the eumelanin produced is diluted or modified by the recessive genes in the B or D series. In other words, all liver dogs (bb) have amber eyes, and so do blue and isabella dogs (dd). Occasionally dogs with black pigment also have amber eyes, but in general they’re found just on livers and dilutes.
Amber eyes vary from light brown (overlapping with the lighter eyes sometimes found in black-pigmented dogs) to yellow, yellow-green or grey. 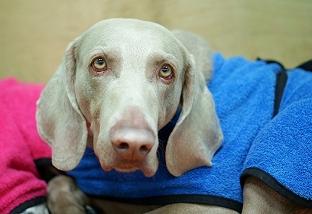 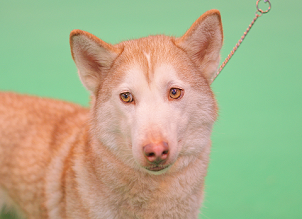 Liver grizzle/agouti Siberian Husky. The pink/brown nose gives this dog away as a liver. 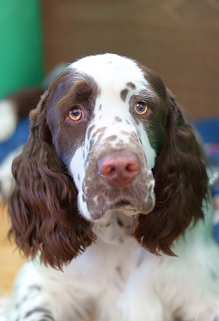 Genetically, there are four ways in which a dog can have blue eyes. Three of these are linked with pigment loss in the coat.

The most common way is as a side effect of the merle gene. Merle dilutes random parts of the pigment, including the eyes and nose. This sort of dilution causes blue colour in the iris (contrary to common belief, animals with no pigment around their eyes do not always have pink or red eyes like albino rodents do – lack of pigment or very diluted pigment often results in blue eyes, as it does in albino humans). Because of the random pigment loss, often merle dogs have “butterfly” noses (see nose page) and blue, wall or split eyes. Wall eyes are when a dog has one blue eye and one brown or amber eye, and a split eye has some blue in it and the rest is brown or amber. Split eyes vary from mostly blue to mostly brown or amber.
The more dilution there is in the coat of a merle (i.e. the more grey/diluted areas), the more likely they are to have blue eyes or a butterfly nose. A heavily merled dog (large areas of black or liver) is unlikely to have either of these traits. Double (homozygous) merles are highly likely to have blue eyes and a completely or almost completely pink nose because of the combination of merle dilution and large amounts of white around the face (see below). 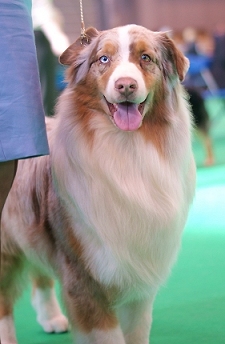 This red (liver) merle Aussie has one amber eye (because of its bb liver pigment) and one blue. If you look carefully you can see a sliver of blue in the amber eye. 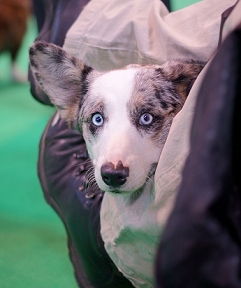 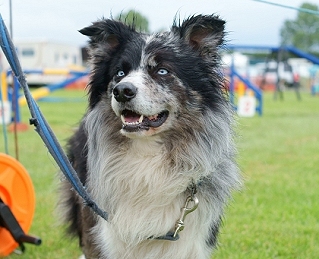 This merle Border Collie has very striking light blue eyes, which is surprising as its merling is fairly heavy.

The second way in which blue eyes can occur is when a dog has large amounts of white around its eyes. White areas on the coat are where the cells are unable to produce any pigment, so if these areas spread to the face then there may be pigment loss in the eyes and on the nose, making the nose pink and the eyes blue. This only tends to occur on very high-white dogs with the extreme spotting pattern, such as white Boxers, and even then is fairly unusual.

The third way is when a dog is affected by the C series. The C series is albino. There are no confirmed cases of true albinism in dogs, however “white” Dobermanns have a very light coat (with the main coat appearing as a very light isabella colour and the tan points light cream), blue eyes and a fully pink nose, and this is thought to be a form of albinism.

Lastly, blue eyes can be inherited as a completely separate gene, unaffected by coat colour. This gene is, however, rare. It is rumoured to occur occasionally in the Border Collie, but mainly it’s seen in the Siberian Husky. Huskies can have one or both blue eyes, regardless of their main coat colour, ranging in shade from almost white to sky blue. This is particularly striking when seen on black dogs.

These two Huskies have almost identical coat colours, but one has two deep brown eyes and the other has one blue eye (eyes of different colours are known as “wall eyes”): 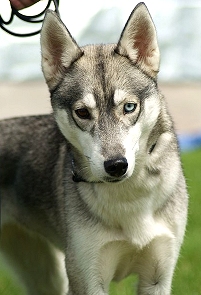 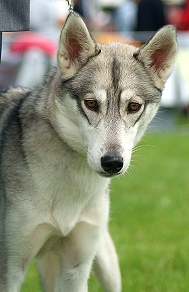 As you can see, both dogs have full black nose pigment and black around the eyes (eye rims), so the only explanation for the blue eye on the dog on the right is that it is inherited separately to coat colour and pigmentation. 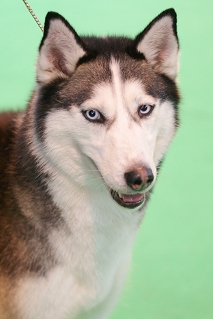 A Husky with two blue eyes. 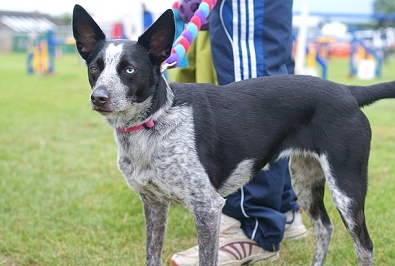 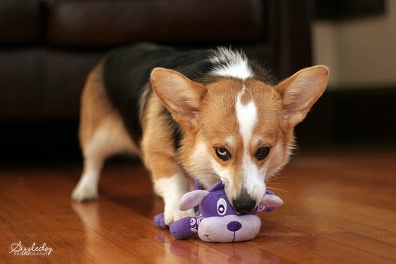 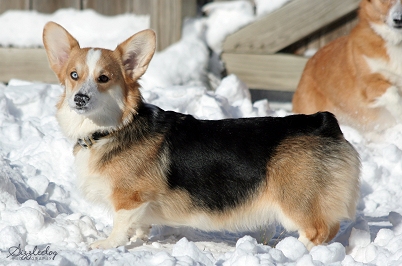 This beautiful Pembroke Welsh Corgi is another example of the independent blue eye allele. On a dog such as this (with no more than 50% black) it can be impossible to tell if a blue eye is due to the dog being a cryptic merle (i.e. one with very little visible merling), however in this case we can be sure that Revy is not a cryptic merle because the merle allele does not exist in the breed.
Neither of Revy’s parents had blue eyes, but one of her grandparents has thrown blue-eyed puppies, implying that this is a different blue eye allele to the one found in Huskies, as it is apparently recessive. 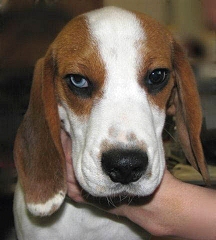 The recessive blue eye allele also appears to crop up in Beagles such as this one. Note the jet black eyerim pigment and the colour surrounding the eyes, proving that the blue eye is not due to white spotting.