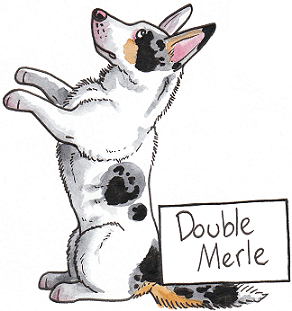 A double merle is one which is homozygous. That means it has two copies of the dominant M gene, so its genotype is MM. This impairs its ability to make pigment. 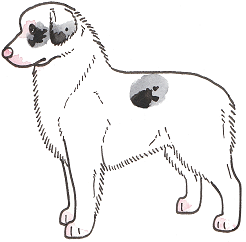 Double merles are typically mostly white and have merle patches on the head and sometimes the body. They do not necessarily have the allele for piebald (although if they do, they’re likely to have even more white than double merles without a white spotting allele), but the MM genotype causes loss of pigment to such an extent that it tends to remain only on the upper areas of the dog – the top of the head, the back and the base of the tail, similar to the extreme spotting pattern. Sometimes double merles are even born completely white. The nose is generally mostly or all pink, and the eyes are generally wall or blue (see eye and nose pages).

Casey the longhaired Dachshund, photos by Mascara from the PKC forum

This Dachshund is a blue (black) double merle with tan (called a double “dapple” in this breed). She has a large amount of colour on her body, probably because she has been bred from solid merle parents rather than merles with white spotting (the amount of white on the merle parents tends to affect the amount of white on the double merle puppy, so high-white parents will generally produce higher-white puppies), but she does have a lot of white on her face. The eye on the side with the white is blue because of the lack of pigment, and she has a butterfly nose. 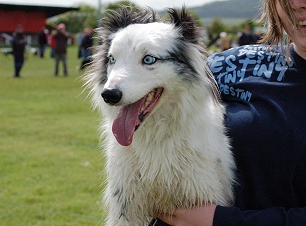 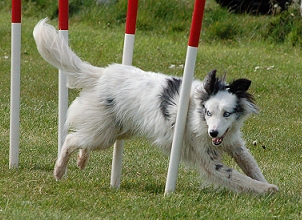 This Border Collie type has a typical double merle coat pattern. However, the full pigment on the nose and around the eyes suggests that she may in fact just be a high-white normal merle. It would be unusual for a double merle to have so much pigment. 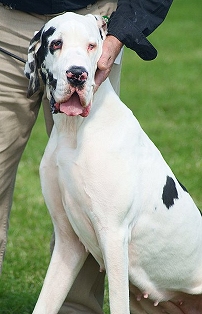 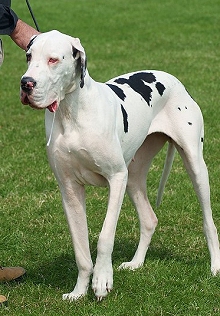 Here we have a probable harlequin double merle. Harlequins are merles with a modifier that changes the way the merle looks (see the page on merle modifiers). The same principles therefore apply to harlequin double merles as do to normal double merles – the patches will generally be smaller and confined to the head and the back, and there will often be a more pronounced lack of pigment around the eyes and nose.

The breeding of double merles is generally frowned upon, not just because double merle dogs rarely match breed standards (for example, a double merle Dachshund like Casey above would be disqualified for too much white and bad pigment), but also because of the health problems linked to them. Some double merles are perfectly healthy, but eye defects and deafness (due to lack of pigment in parts of the inner ear) are common, as well as sunburn and skin cancer on exposed pink areas. See the page on health problems for more information.

A double merle can only be bred from two merles, as it requires an M gene from each parent. As merle is dominant, no dogs can be carriers of it – any dog with one M gene will be a merle. However, occasionally merle can be hidden by other genes. A recessive red dog will not display any merle because it is unable to make eumelanin in its coat, and the merle gene only affects eumelanin (black, liver, blue and isabella). A clear sable ( dog with a red coat due to the sable gene, but no visible black sabling) will also not show any merling because there is no eumelanin to be merled, unless it also has a mask (which does show merling). Shaded sables will often show merle at birth, but it tends to fade as the dog grows up, so all that remains on an adult is usually a few darker brownish patches on the coat (which can be hidden very easily by long fur). The greying gene can also make it very difficult to see merle markings, as can the dilution gene (dd), because it dilutes the patches to roughly the same colour as the base. Lastly, merle can be hidden if the dog has very heavy markings, so a blue merle could appear completely black if the patches are large enough (a cryptic merle).
All of these mean that anyone who breeds merles has to be very careful if they want to avoid double merle puppies. Sometimes the hidden merles described above have a blue eye or a butterfly nose, which give away their merle gene, but often there is no sign at all that they are merle. If such a dog is accidently bred to another merle, some of the puppies will be doubles.

Let’s quickly have a look at some Punnet squares again to see how merle breeding works. You may need to go back to the breeding page to understand this if you’re not sure what a Punnet square is.

It’s clear from this that breeding a double merle to a non merle is the only way to get a completely merle litter. Double merle to non merle and merle to non merle are the only “safe” breedings – i.e. the only ones which cannot produce double merle puppies. Breeding merles of any sort (single or double) together is always risky. I haven’t included a Punnet square for a double/double breeding, but that one is easy enough to work out – each parent can only possibly pass on the M gene, so all puppies will be MM (double). Because of this, double merles should never be bred together.

Double merles are often referred to as “lethal whites”. This is an incorrect and misleading term. There is nothing lethal about the merle gene, it can just be problematic. Lethal white is a completely separate gene which does not occur in dogs. It occurs in horses, and is recessive, unlike the dominant merle in dogs. Lethal white (also known as Overo Lethal White Syndrome) kills 100% of horses which are homozygous for the gene. A lethal white will be completely white with blue eyes. It is unable to produce any pigment, like an albino, and because the cells in the intestine are linked (embryonically) to the cells which control skin pigment, they don’t develop properly. The intestine is therefore contracted and lethal white foals are unable to pass faeces. This eventually results in death.