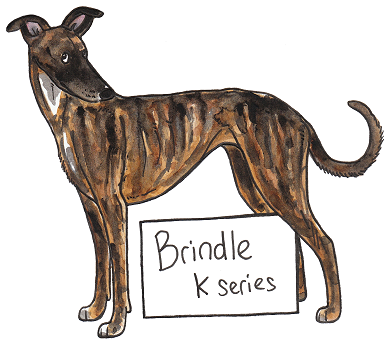 Brindle is one of the recessive genes on the K locus. There are three K locus genes – K (dominant black), kbr (brindle) and k (non-solid black – allows A locus to be expressed). K is the top dominant and k is the bottom recessive. kbr sits between the two. It is entirely dominated by K (so just one K gene will stop brindle from being expressed), but is dominant over k, so a brindle dog can have the genotype kbrkbr or kbrk.

A dog with one or two kbr genes will express whichever genes it has on the A locus, but any and all phaeomelanin (red) in the coat will be brindled. This means that the extent of the brindling on the coat depends on the A locus. The following list shows how the different A locus genes affect the appearance of brindle.

Brindle + awaw (agouti/wolf grey) – effect on dog is unknown. Would most likely appear to have brindle points, or brindle may not appear at all

Brindle typically appears as black stripes on a red base. The stripes are eumelanin and the base is phaeomelanin, so the appearance of those pigments can be changed by any of the genes which usually affect them.
– Eumelanin (the pigment making up the stripes) can be affected by: merle (and harlequin), liver, dilution, greying, and recessive red.
– Phaeomelanin (the pigment making up the base) can be affected by: Intensity locus.
And of course, white markings and ticking can occur on any brindle dog.

Stripe width can vary greatly, and it is not known which genes, if any, are responsible for this variation. 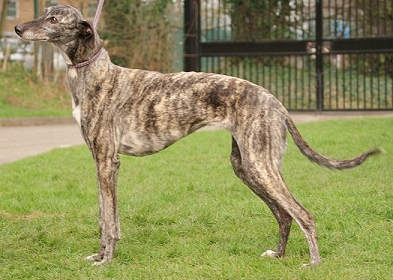 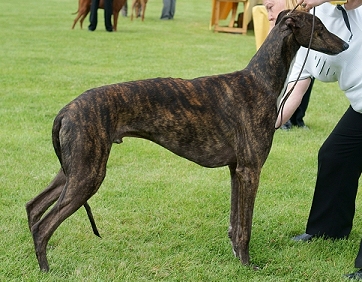 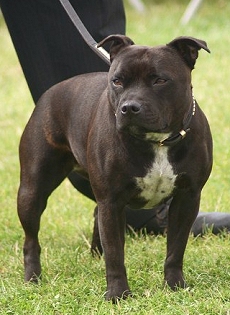 This Staffie shows even heavier black striping than the Greyhound above. There is only a very small bit of tan visible on the hip, and the rest of the dog appears solid black. This type of striping is sometimes called “black brindle” or “reverse brindle”.

VARIATIONS IN BASE COLOUR

The base colour on a brindle can vary as much as red can usually vary, from a deep Irish Setter colour to a light cream. A light base coat on a brindle is generally due to the Intensity locus, which dilutes phaeomelanin (red pigment) to cream, but has no effect on eumelanin (black pigment).

These are all details taken from photographs of brindles with black stripes.

Brindle with a Mask

A dog which has at least one Em gene on its E locus will have a black mask. This is an area of eumelanin covering the muzzle and sometimes the ears. If a dog is a brindled sable (brindle gene + sable gene), it’ll be brindle all over, and on dogs like this masks may be visible. 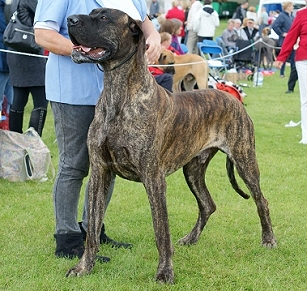 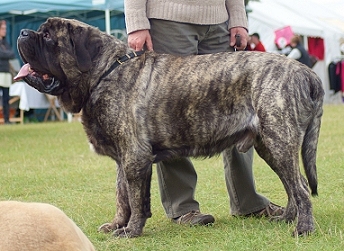 You may notice that on the Great Dane above the phaeomelanin (red) is deeper on the back and on the chest and legs is almost white. This is most likely due to the urajiro pattern (see the C and I locus page). As urajiro only affects phaeomelanin, the black stripes are unaffected.

Sometimes a brindle dog with black pigment may have silver stripes, usually on a cream background (never deep red). This colouration is generally associated with sighthounds, particularly Afghan Hounds. The overall effect may be similar to how a blue brindle (dd dilution gene) would look. Silver brindle is caused by the greying gene (G locus), which turns black to grey as the dog ages.
Sometimes dogs with black stripes and a very light cream base (see above) are also referred to as silver brindles. 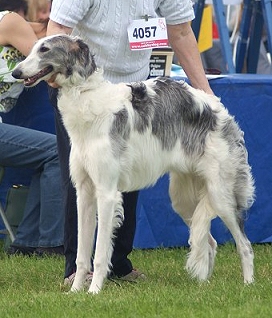 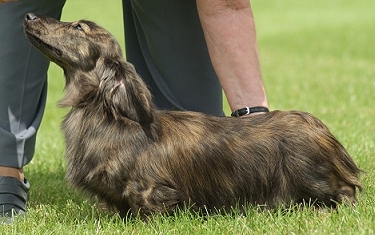 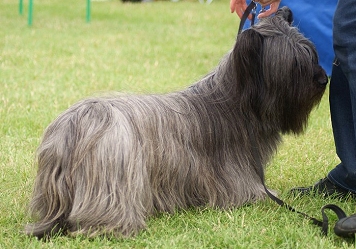 Even between longhaired breeds, the visibility of brindle can vary. The Dachshund here has very distinct stripes and is obviously a brindle, but the Skye Terrier just appears to be a muddy grey/brown. The main way we can tell this Skye is brindled is simply its muddy-coloured coat – this colour occurs almost exclusively on brindles and never on normal solid reds or sables. It also appears to have some lighter and darker areas, which also suggest it is a brindle. 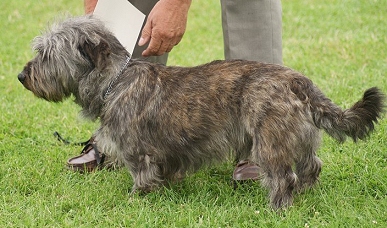 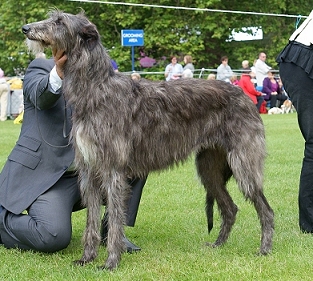 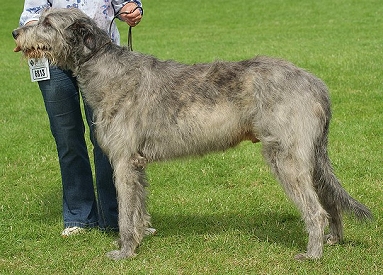 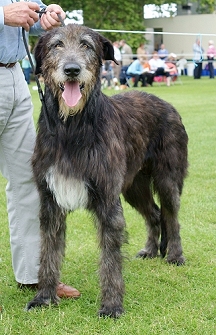 These Wolfhounds and Deerhound show brindling on wirey coats. On the first two dogs, greying has caused the black striping to fade out.

Because the brindle gene allows expression of the A locus, any A locus coat patterns can show brindling on their red sections. The main patterns are sable (AyAy) and tan points (atat). A sable brindle will appear solid brindle (in fact, all solid brindles are sables), although any areas of shading will remain dark. A tan pointed dog with the brindle gene will appear black with brindle points instead of tan. 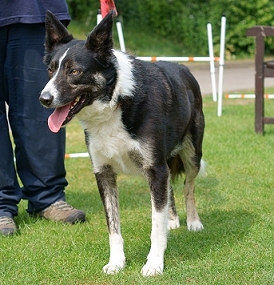 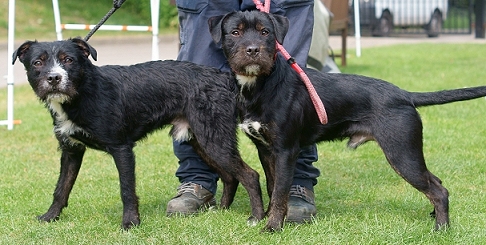 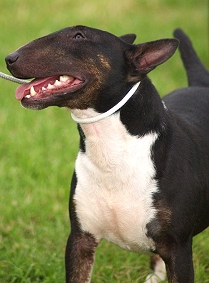 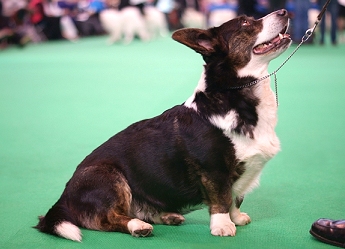 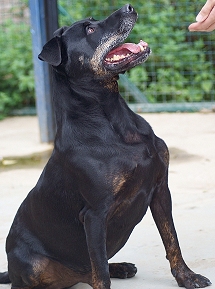 All of these dogs display black-pigmented dogs with brindled points, with or without white markings. 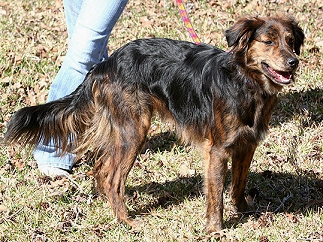 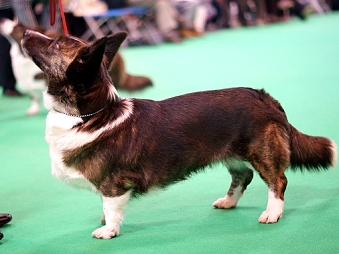 Crossbreed photo by _____
These two dogs are brindle with saddle markings(atat plus an unknown modifier, see the Agouti page). Note the large areas of solid black on the back and brindled tan on the legs and head. The Cardigan Welsh Corgi also shows white in the irish spotting pattern.

These are dealt with on the merle page.

A brindle dog will have liver (brown) stripes if it is bb on the B locus, blue stripes if it is dd on the D locus, and isabella stripes if it is both dd and bb. Dilution affects phaeomelanin (red) too to some extent, so the base colour will be relatively light (certainly not a deep red colour, but more likely cream). 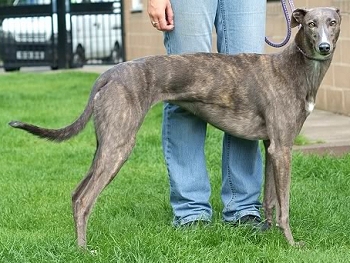 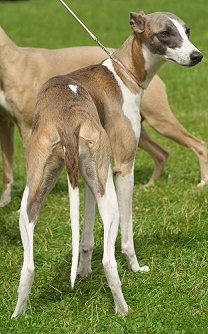 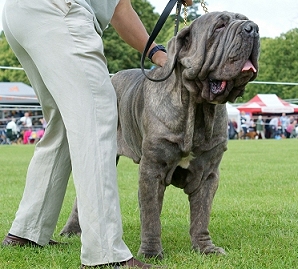 Here are three blue brindles. The Whippet is a very light brindle, and the blue colouration is mostly visible on the mask and nose. The Neapolitan Mastiff, on the other hand, is a heavy brindle, so the overall appearance is blue.

On some light brindles there may be solid red areas where it appears stripes are “missing”. This is particularly common in Whippets, but the genetic basis is unknown. Have a look at the Whippet below. In the first picture the brindle appears normal – however in the third picture you can see a large clear area on the dog’s side. 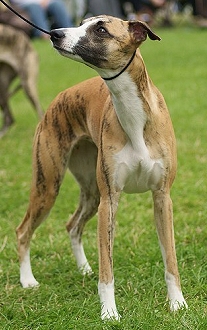 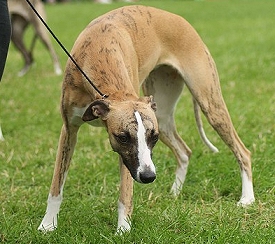